Tuffin glues his face to the glass.

Tuffin’s tank is empty of fish but there is a castle and shells and coral and a mermaid sitting on a rock and pebbles with numbers on.

Today he has a new addition. A pebble from Deal with a number 11 on.

It joins pebbles from Folkstone and Hastings and Sandwich and Herne Bay and Camber Sands and Dymchurch and Beachy Head. They all have numbers on.

“Each rock marks the spot.” He thinks.

Now Deal is in his tank –

He turns the television on to warm it up and then turns the light off.

The sitting room is very dark even in the day.

Now it smells of warm dust.

He sits down and opens the velvet curtains, with a pulley and a long string.

Through the window the tall dense green garden goes blue too.

He watches the people and listens to them.

After an hour he closes the red velvet curtains and turns the light on.

He stands in the hall and drinks orange squash and eats chocolate raisins and he goes to the toilet.

He is looking forward to the next bit.

After fifteen minutes he has finished his orange and raisins and goes out of the hall into the sitting room.

He turns the light out and sits down and opens the red velvet curtains with the pulley and the string.

He watches the people and listens to them.

Behind him, through the window, the light from the tall dense blue garden. 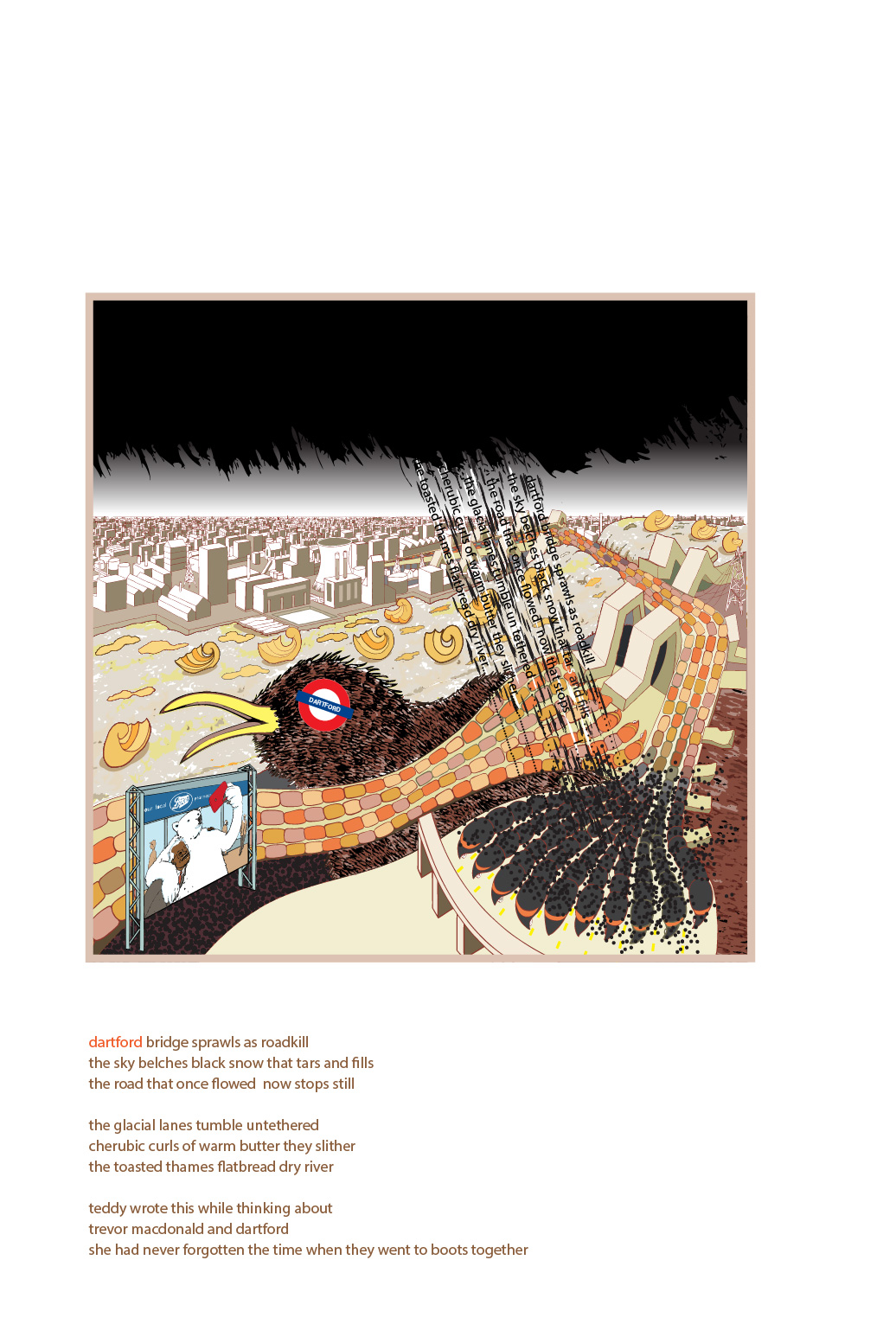 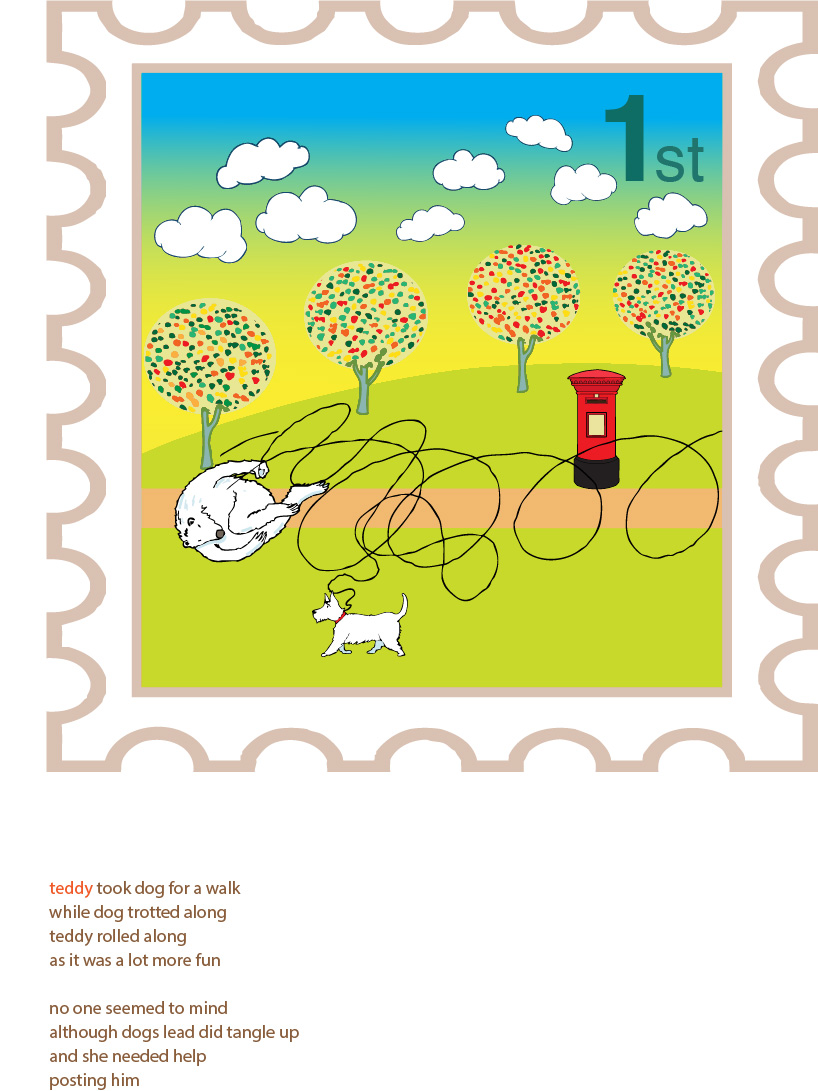 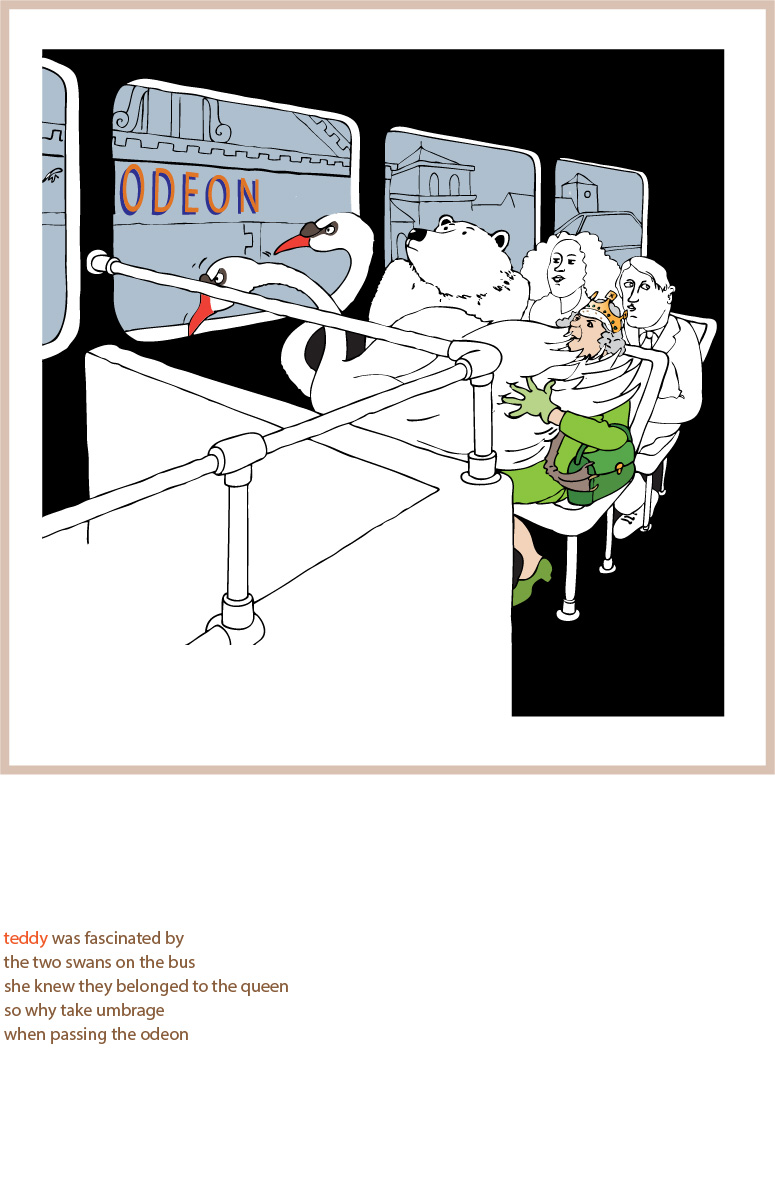 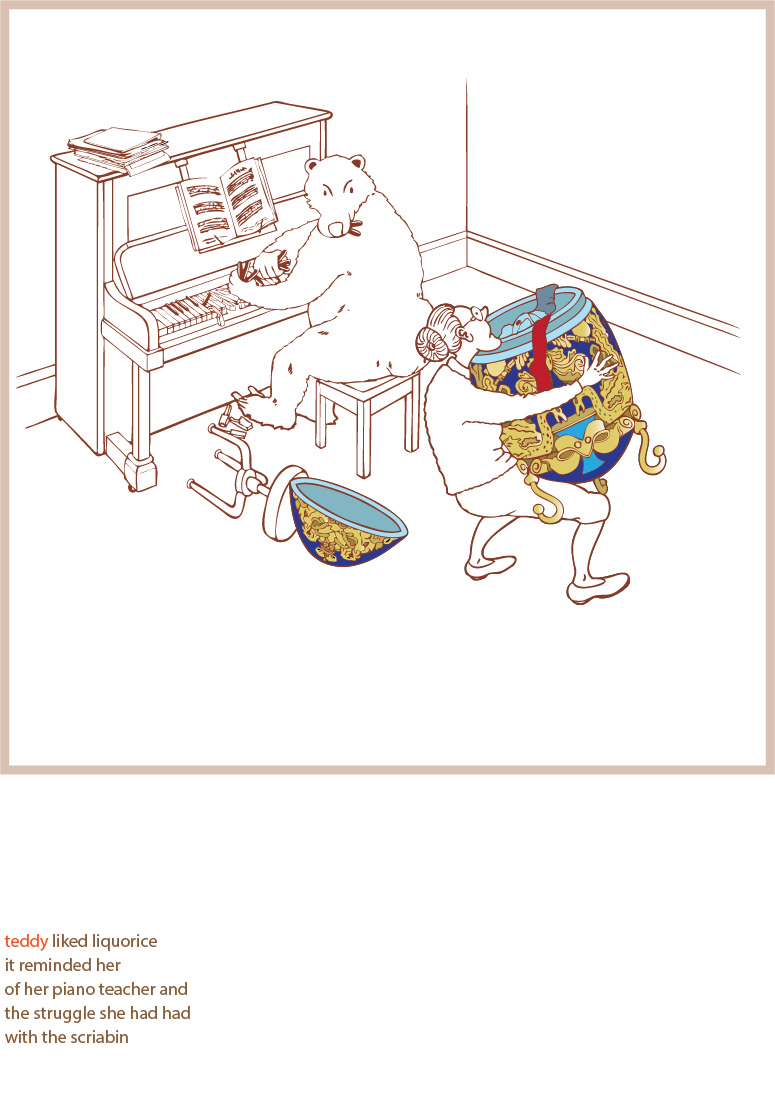 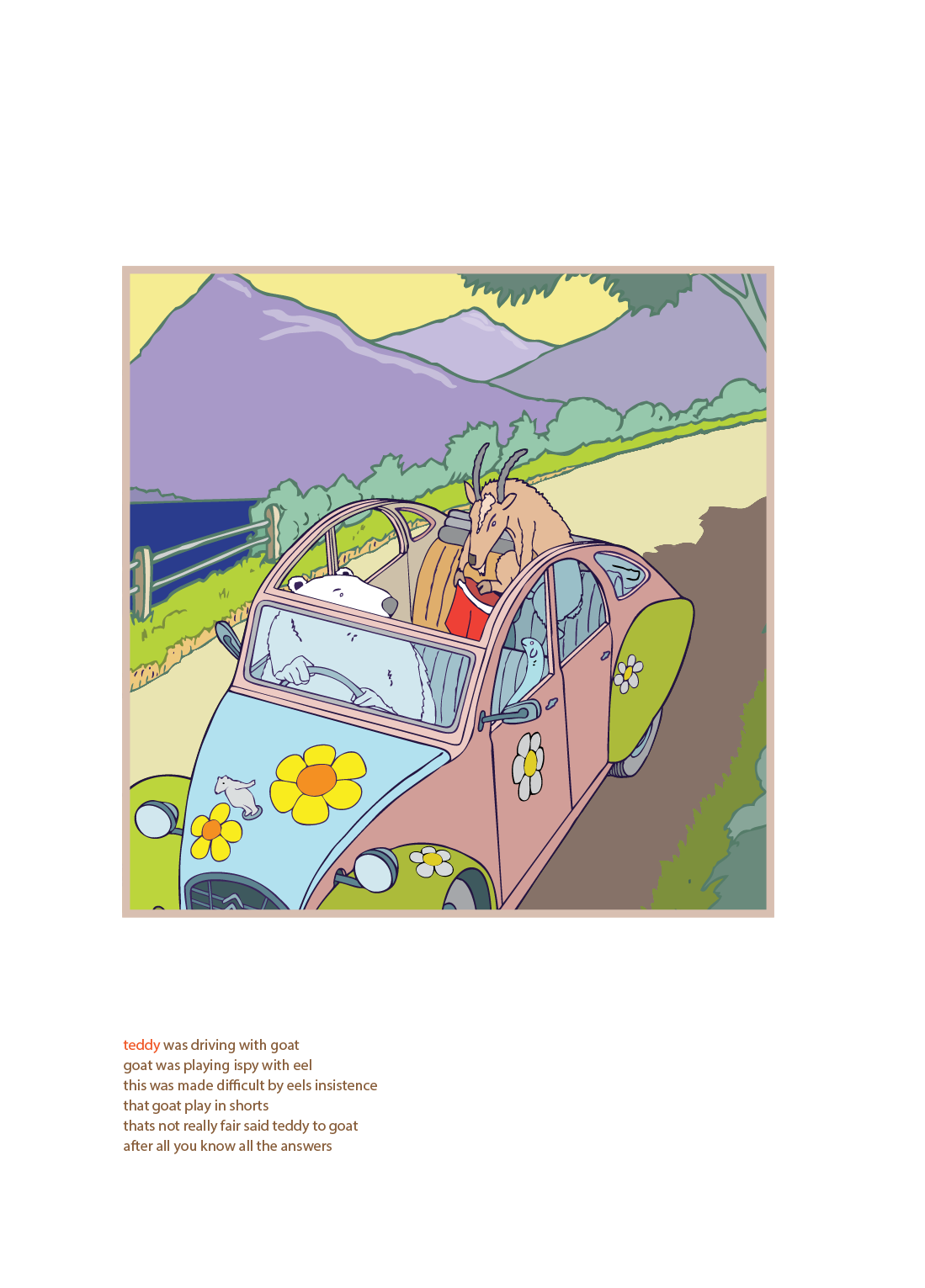 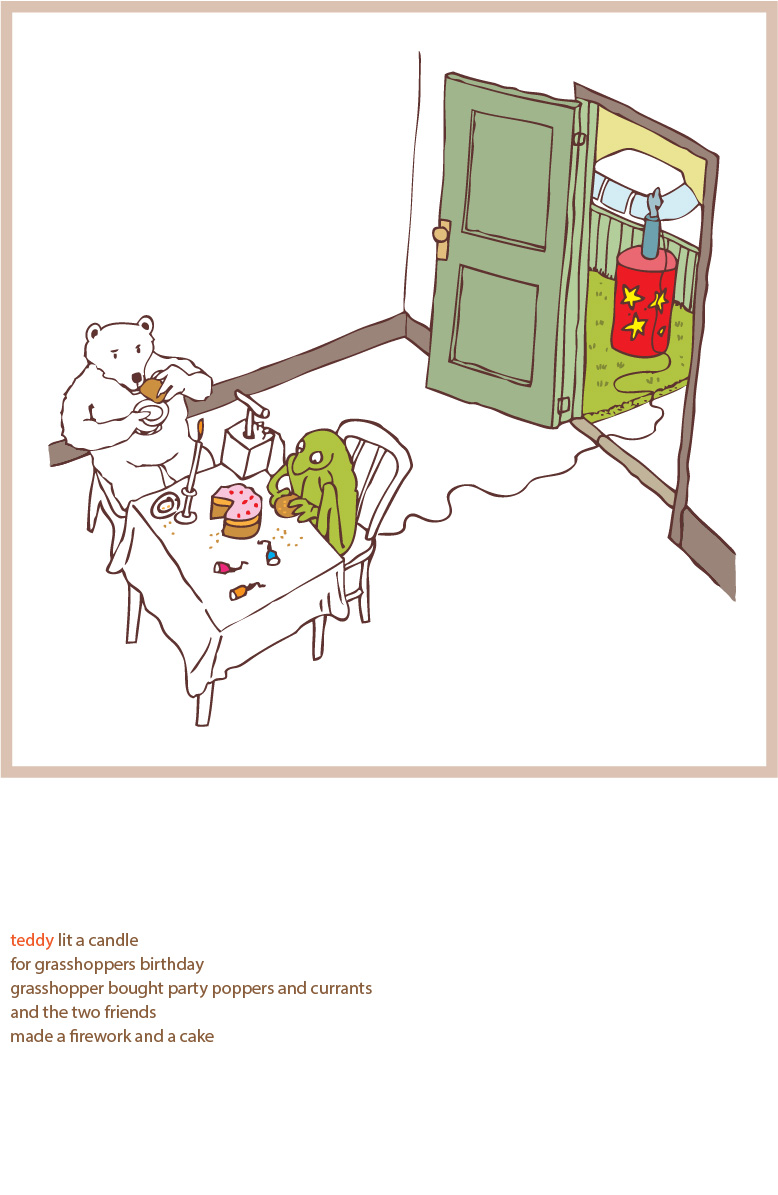 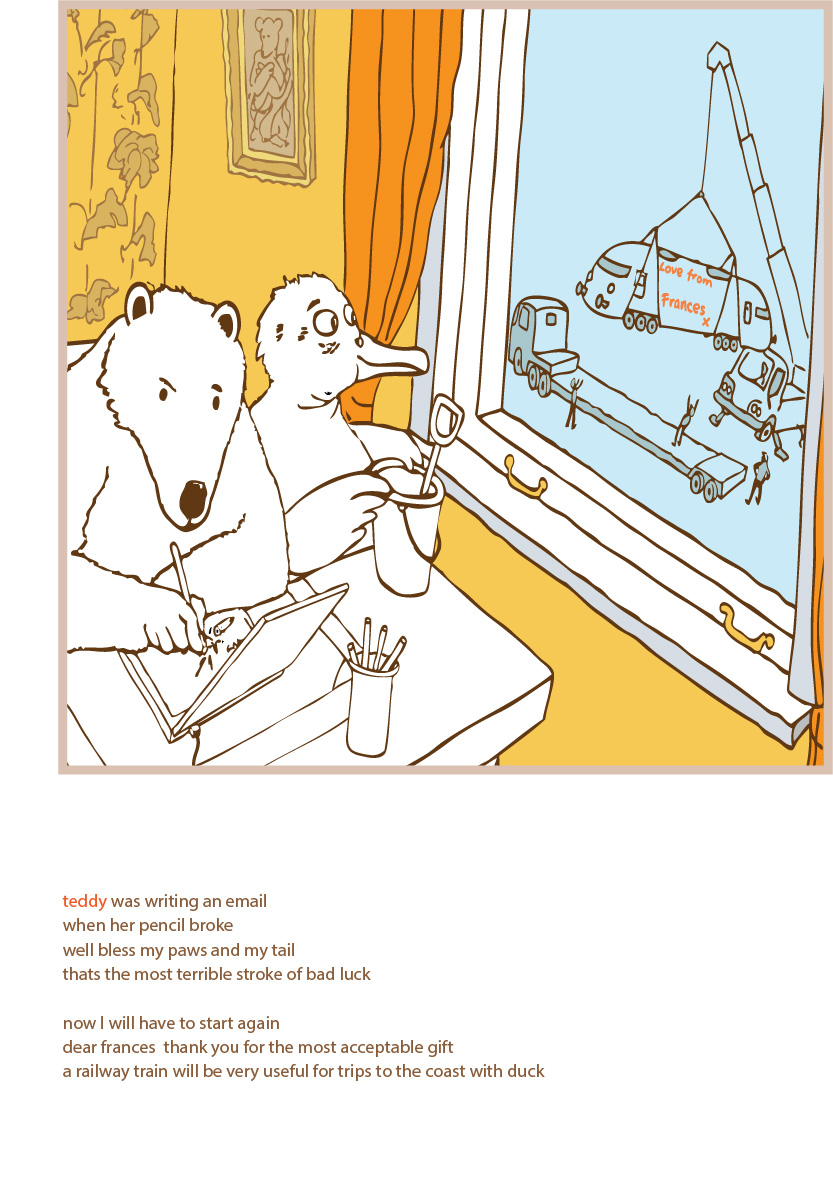 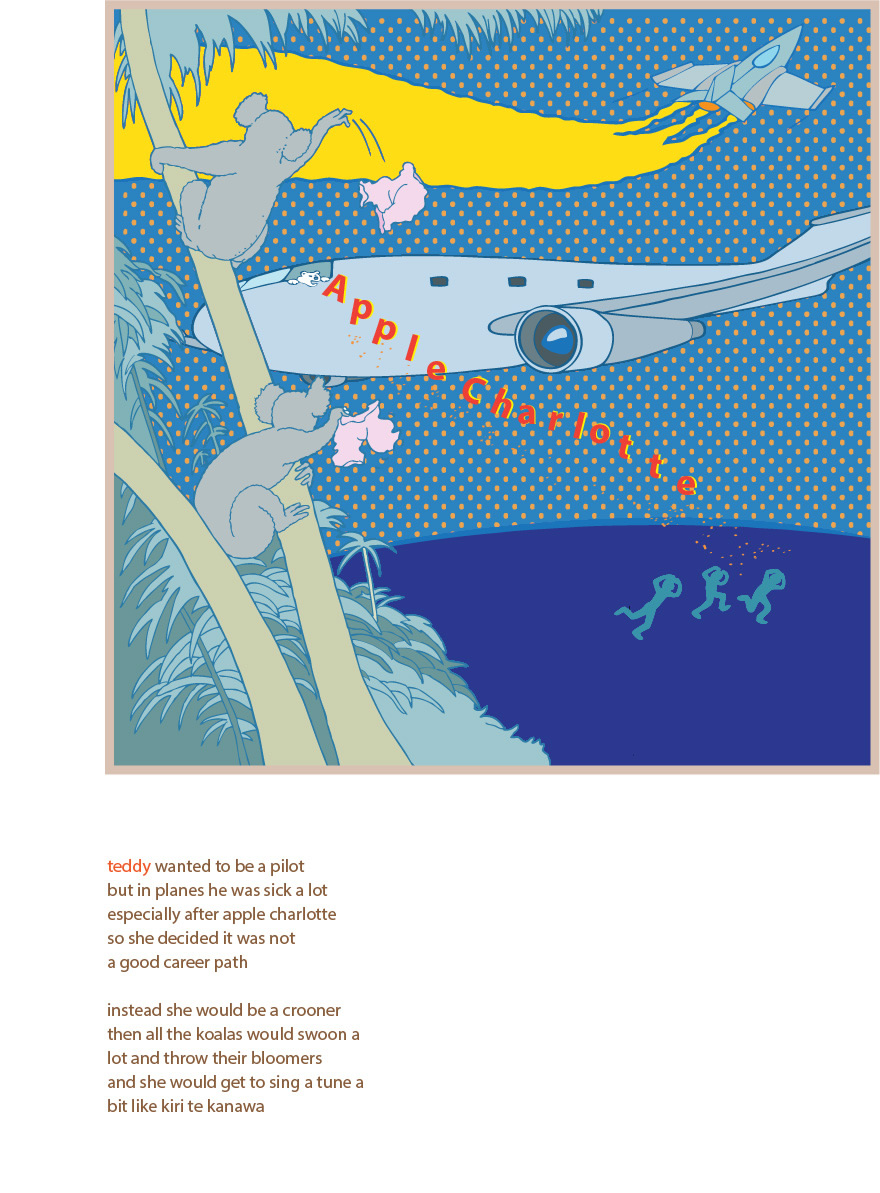 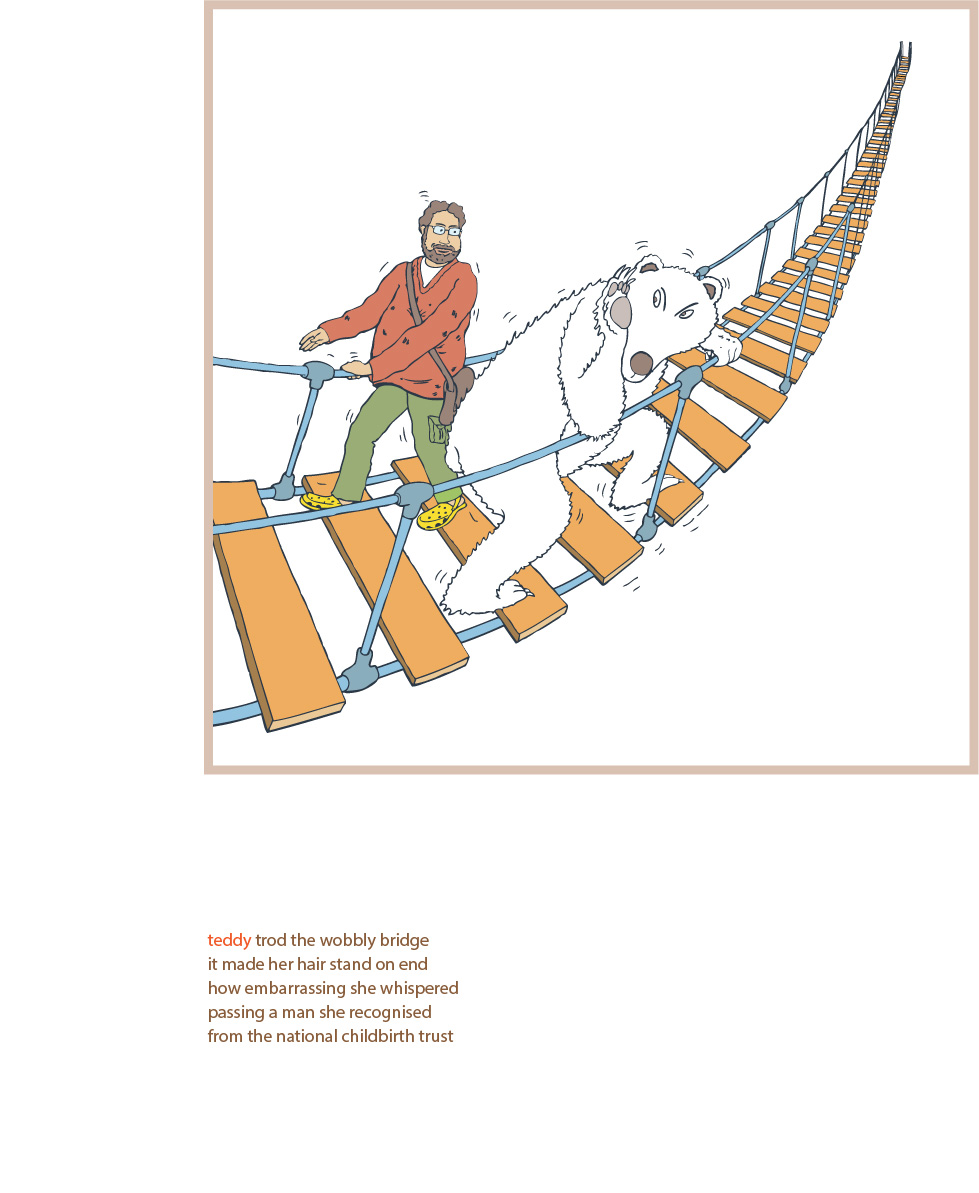 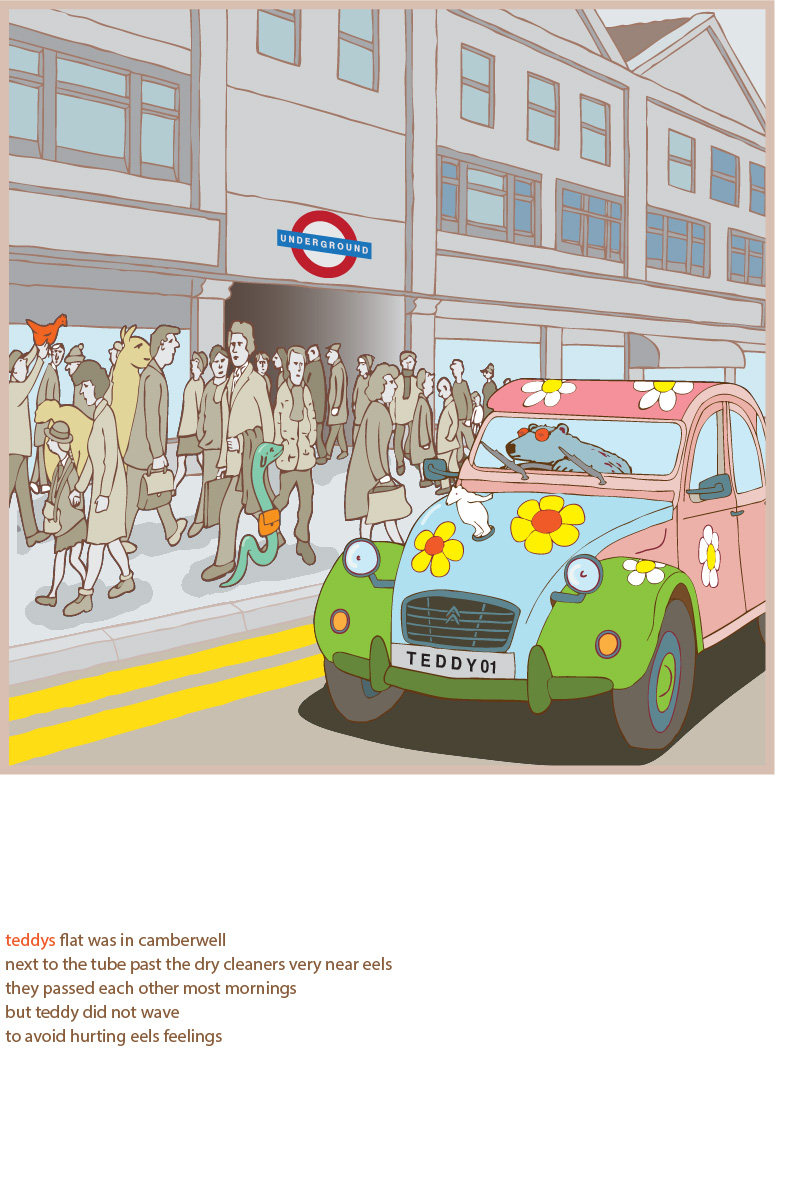 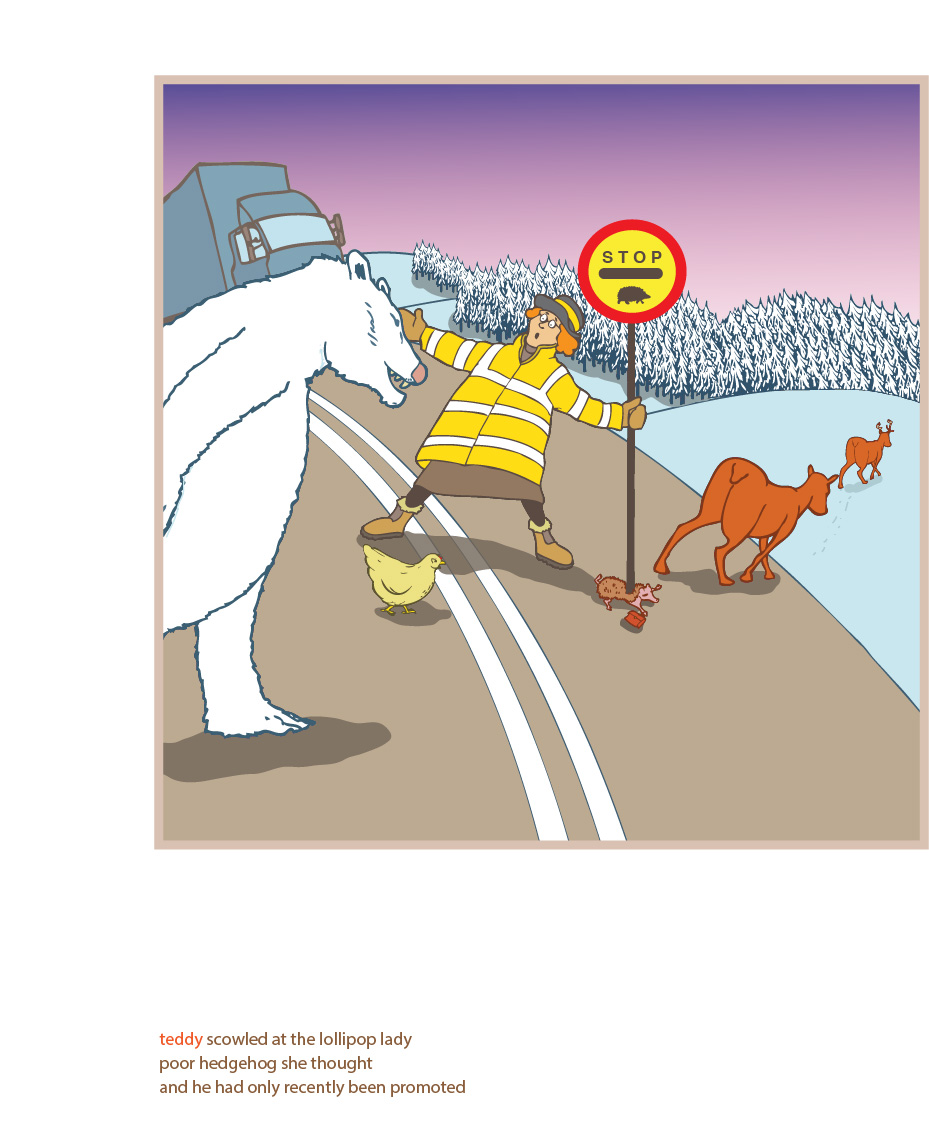 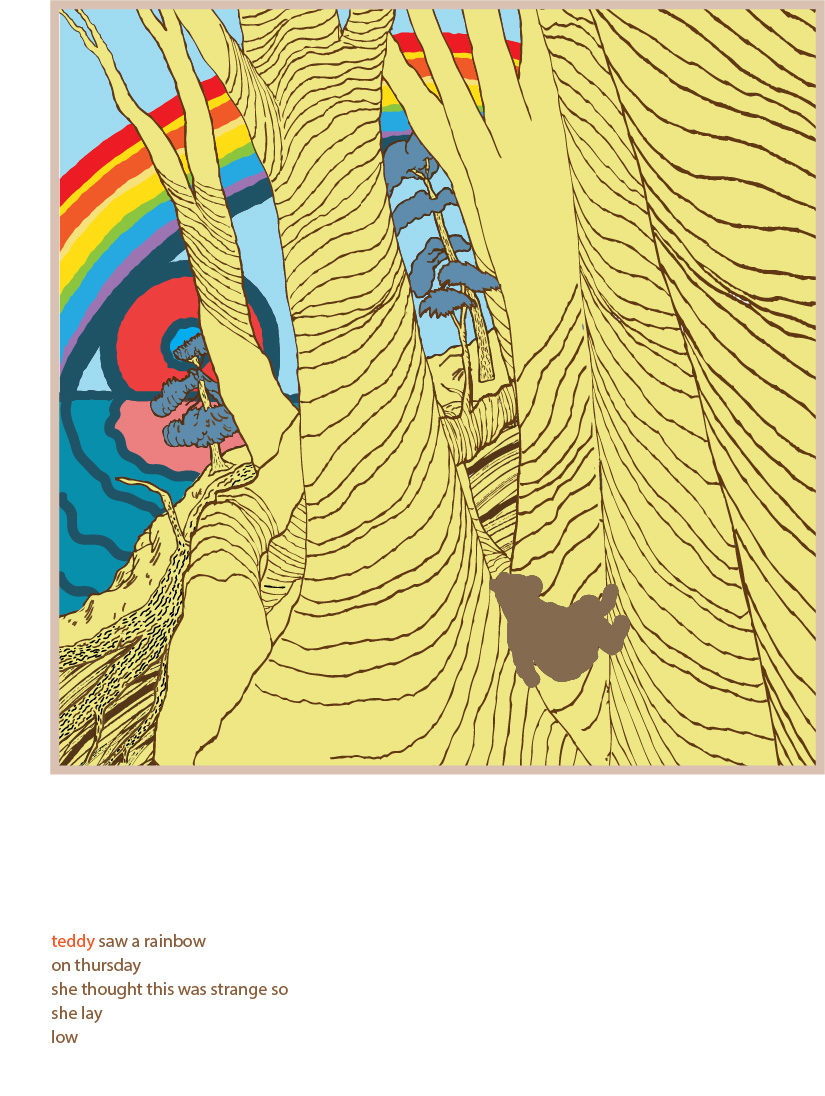 Here is Tuffin occupying the best seat in the station waiting room, near the gas fire on Sunday so no trains are expected so no one is here. He puffs on his pipe and makes smoke like a train.

A blind man and a dog come in. The blind man sits opposite and the dog sits with Tuffin and leans his head on Tuffin’s lap but Tuffin likes dogs and this one is a fine one. Tuffin is not sure if the blind man knows he is here so he stays very quiet so as not to startle him. The blind man farts so Tuffin puffs on his pipe a bit more. The dog drools on Tuffin’s lap.

Tuffin dare not move despite the fart and the drool. As it is Sunday no one else is likely to want to wait.

The dog scratches.
The blind man scratches and makes a pillow with his bag and falls asleep and snores.
So does the dog.

…Now Tuffin goes to the door and leaves the waiting room.
…But he waits at the platform puffing on his pipe and making smoke like a train.

A train stops and the blind man gets on without the dog, with the book and with the bag but it’s Sunday.

Tuffin goes back to the waiting room and the dog is occupying the best seat by the gas fire and he is awake.

Tuffin’s garden was a square like everyone else’s. He planted only green and leafy and bushy and tall things, no coloured flowers at all. He put a path around all four sides just wide enough for him to walk round, and used a ladder and a plank and a spirit level to clip everything very straight and flat and to keep them from growing too tall and annoying anyone.

The garden grew into a giant and dense and green cube.

Tuffin knew how to squeeze into his garden without disturbing a single thing. Inside everything was clipped to perfection making a square room with leaf green walls and a leaf green ceiling and a grass green floor. The floor was painted green as the room was dark and real grass did not thrive.

In his garden Tuffin would do all the usual garden things. He would hoe and water and weed and take tea at a table and as he worked he would hum and whistle along to the wireless. He set up a tiny badminton court to pop pop on and set the mower blades high enough that he could mow the grass in stripes and make the clickety clickety noise quietly.

Tuffin’s garden was the same in the day and the night. Birds did not nest in the trees and local cats did not litter. Butterflies passed by and bees and wasps did not bother. Neither the sun nor the moon ever shone and rain never fell. It annoyed no one.

Tuffin’s house was new, when he was new, and now both of them were 60 years old.

At 11:15pm on Thursday he sat in his chair in the sitting room.

He knew that beneath his feet was a red rug, a brown carpet, grey linoleum and wooden floorboards.

He went to the tool shed. He selected a jemmy and a claw hammer.

He moved his chair, lifted the rug, rolled up the carpet and peeled back the Lino.

With the jemmy and the claw hammer he removed a small area of floorboard.

He exposed the joists and the brickwork but it was dark.

Tuffin went to the tool shed again and collected a torch.

With the torch he was able to see down beneath the joists.

Beneath the red rug, the brown carpet, the grey linoleum and the wooden floorboards a thick layer of grey dust covered a concrete floor.

Embedded in the dust were several fresh footprints as finely wrought as the finest filigree.

He was alone so it was easy to remember.

Then one day, after hundreds of digits.

When she had finished Tuffin replaced the receiver. He looked at the telephone on the table in front of him and the photograph beside it.

He knew it was her.

Here is Tuffin taking a red bus on a foggy Saturday at 5:00pm in December.

At 5:25 pm, at the railway station everyone gets off leaving the top deck empty. All the windows are steamed up and most are smeared by hands and cuffs and gloves and handkerchiefs but the wide window at the front is untouched. Tuffin moves to the front. He can just about see his misty face reflected in the glass.

He removes a pencil from his top jacket pocket. The sharp end is no good but the rubber end is perfect. He traces his face through the mist onto the glass. He draws his mouth and nose and ears and hat. With his nails he forms lashes and with his fingers he makes eye-holes so that the dark outside looks in.

In places water drips, making the picture weep. This amuses him, but his face floats in an expanse of nothing – and that doesn’t, so he draws the background as fast as he can.

•He is wet and steamy and hot.

He draws a jungle and monkeys and toucans and tall trees and everything. Fresh mist from his breath feeds the grasses that grow taller and stronger and creatures swing and climb and crawl and fly about. From his face a lion with a straggly mane springs. It peers back through the drips at the bus. He works until every bit of the canvas is filled with his touch.

Here is his stop. Here are the village shops lit with Christmas. Here is the lion glowing green, the toucans glowing gold, the grasses glowing blue, the monkeys glowing red and here is Tuffin’s face, pink and wet and glowing and stepping off the bus and walking home. 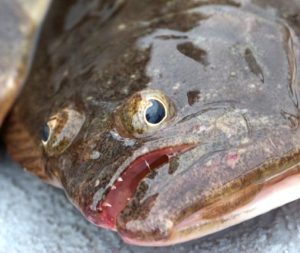 A flat fish lay on a cold slab looking up. Looking down was a woman and a child. The child crinkled its nose and made a disgusted noise. The woman bought the fish and the three of them went home. Later that day the woman went to cook the fish but it had gone. She went to ask the child if she had seen it, but she had gone too. The woman returned to the shop and asked the fishman if he had seen the fish. The fishman said he had not, but that he had seen the child. “Like you, she asked about the fish.” He said. The woman returned home and telephoned the Police. “Someone stole a fish from my house.” She said. The policeman asked her if anyone else was there at the time. “A girl.” Said the woman. The policeman asked the woman to come to the police station. At the police station the woman was shown some pictures. The pictures showed a fish on a cold slab looking up.

Tell me a story

Three calls each sitting.
Four digits so as to stay local.
I never repeated the same four.
It was easy to remember.